A video game designer creates the core features of a video game to make it engaging for users. They design the characters in the game, may assist with the storyline and goal of the game, and implement the game design to make the game more engaging to users. They also get to collaborate with others on the game project to ensure a successful launch and fun gaming experience.

How to Become a Video Game Designer

You have a few options when considering which bachelor’s degree to choose. Some degree programs may focus solely on video game design and development where other programs can provide you the foundational skills needed to develop games. For example, you could go to school for a bachelor’s in computer science and learn how to develop. This would teach you the skills necessary for game development. Then, you could take electives in video game design. Another bachelor’s degree option would be a degree in multimedia arts. No matter the degree program you choose, you’ll want to ensure it teaches you graphic design, coding, and game theory.

Video game designers will work in a variety of stages in the video game development process. These designers could be part of brainstorm sessions to think of new game ideas that would engage a wide audience. They may then be responsible to outline the game’s concept into a storyboard to document the gamer’s experience. This storyboard can become a resource to help plan the project out into the various tasks that are needed to develop the game.

Video game designers may also develop the code necessary for the game to work. They would document their code and share their progress with the team on the project. Ensuring the code works and limiting bugs in the game is vital in this phase. These designers may still recommend engagement elements for the user to ensure the game is challenging enough to keep them interested but not too easy to want to stop playing. Once users are able to play the game, video game designers will also collect user feedback to fix any bugs people may catch or make revisions to the game if able.

EdX.org hosts many free courses on game design and development that are taught by some of the best universities. If you visit EdX.org and do a search for ‘video game’ you can review the list of options available. One such option is offered by Harvard called CS50’s Introduction to Game Development (link opens in a new tab). Rochester Institute of Technology also offers a course on EdX.org titled Video Game Design: Teamwork and Collaboration (link opens in a new tab). Taking free courses such as this can allow you to explore a career field before deciding on your major and may even prepare you for your college courses. 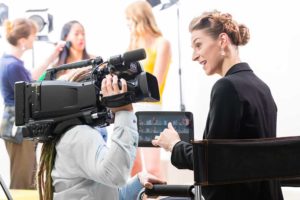 Video game designers create the rich, exciting worlds that allow us to indulge our imaginations and immerse ourselves in an alternate reality. If you play video games, you’ve probably thought about turning it into a career, but know there are many dimensions to this occupation. Video game designers start with a list of concepts, narrowed down by a large team of developers to the best one. Teamwork is essential in this field, as designers collaborate with role-play mechanics, storylines, character development, graphics, and everything in between.

They are likely to need expertise in programming languages and game design computer software as well. They usually work in office settings, with typical office hours expanding to overtime as project deadlines approach. A single project usually lasts about two years, and ‘crunch’ time can last months – but through it all, these designers still report high levels of job satisfaction. To enter the field, some will create a portfolio of video game designs and concepts that will help them get noticed and hired. Others start out as quality assurance testers and work their way up. A bachelor’s degree in computer science isn’t usually required but it can be helpful if you lack other experience. These professionals aren’t just making games, they’re designing the future of gameplay experience.